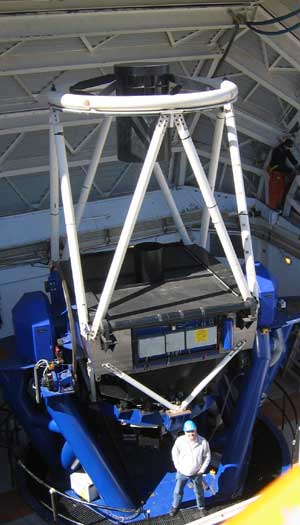 Founder of the Liverpool Telescope Professor Mike Bode stands in front of the telescope.

The Liverpool Telescope, or "LT", is a fully robotic astronomical telescope owned and operated by the Astrophysics Research Institute of Liverpool John Moores University in north west England. It was designed and built by Telescope Technologies Limited (a spin-off company of the university) as the prototype of their production-line range of two-metre class telescopes. The LT was therefore the "first off the line".

The telescope itself is a two-metre Cassegrain reflector, with Ritchey-Chrétien hyperbolic optics, on an alt-azimuth mount. Up to nine different instruments can be mounted at the Cassegrain focus, one in the "straight through" position and eight more on side ports accessible by a rotating "science fold" tertiary mirror. Over the years a wide variety of optical and near-IR imagers, spectrometers, and polarimeters have been mounted on the LT. [MORE → Instruments ]

The part of the observatory building housing the telescope itself (the "enclosure") is a novel clamshell design which opens in two halves from the top down (think of a doctor's bag), giving the telescope an unencumbered view of the entire sky, and reducing the time it takes to slew to a new target. [MORE → Telescope Specification/Mechanics]

Contrary to its name, the Liverpool Telescope is not in fact in Liverpool, but in the Canary Islands. It's sited at the international Observatorio del Roque de los Muchachos on the summit of the island of La Palma, westernmost of the Canaries, some 200 km off the coast of north-west Africa.

This site is one of the best astronomical sites in the world; the remoteness of the island, lack of urban development and local agreement to restrict artificial light pollution ensure the continued quality of the night sky. Among the many telescopes sited at the Observatory are the 4.2m William Herschel Telescope (part of the Isaac Newton Group), the 3.6m Italian Galileo National Telescope and the 10m Spanish GranTeCan telescope. The LT is one of the most recent, and the only one which is robotic. [MORE → Telescope Specification/Site Location]

When we say "robotic", we do not mean that it is operated by remote control, either by anyone on the island or anywhere else in the world. Instead, we mean that the LT is fully autonomous, i.e. it operates by itself as if it had a life of its own (or rather an "astronomer" of its own, working the telescope). For this reason it's been described as somewhat like a "space probe on the ground". [MORE → Robotics]

Should the need arise however, we can take manual control either remotely from the UK or locally with the help of trained personnel on La Palma. [MORE → Staff List]