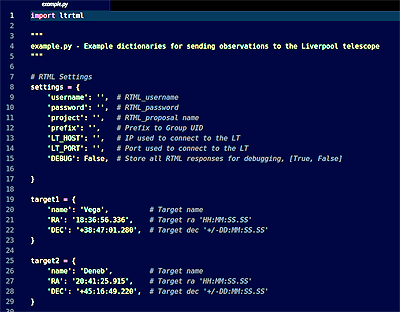 The new ltrtml Python module allows users to create and submit RTML observing requests to the Liverpool Telescope in a purely pythonic way.

With this module, users can now submit observations to the telescope from automated Python scripts. This is an alternative to using the fully featured PhaseII user interface, and is suitable for the most common observation modes. See the RTML page for more information on available instruments, features and how to apply for RTML access.

This module was created when Kyle Medler and Supervisor Professor Paolo Mazzali needed to automatically schedule transient follow-up observations from their pipeline. A couple of existing RTML methods to do this were investigated, but creating the new module enabled a simpler and more robust implementation without any Java dependecies or Python system calls.

Kyle was guided by Dr Doug Arnold, DevOps engineer for the Liverpool Telescope, in a short project to expand Kyle's software development skills with new concepts, whilst at the same time producing a usable library for LT users. Of the project Kyle said, "Being able to get into low level details of the Liverpool Telescope has been a great opportunity. I've developed my skills in Python language structure and features whilst creating this module and it's satisfying that it will be useful to astronomers using the Liverpool Telescope."

To obtain the module, along with instructions and example code, please see the ltrtml github repository. 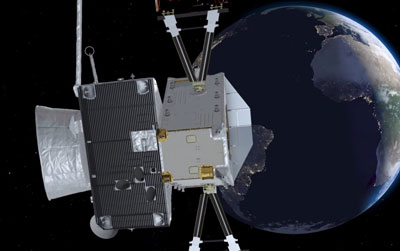 Last month the spacecraft BepiColombo swung by Earth on its way to the planet Mercury. BepiColombo is a joint mission between the European Space Agency (ESA) and the Japan Aerospace Exploration Agency (JAXA).

Launched in October 2018, the spacecraft spends seven years performing gravity-assist flybys past Earth, Venus and Mercury. These are to lose speed with respect to the Sun in order to go into orbit around Mercury itself in late 2025.

The first of the flybys occurred at 04:25 UTC on 10th April, when the spacecraft flew by Earth just 12,677 km above the South Atlantic. The flyby reduced BepiColombo's speed relative to the Sun by about 5 kilometres per second.

The LT was approached by the National Institute for Astrophysics (INAF), who provided several instruments for the mission, to observe BepiColombo while it was in the vicinity of the Earth. The LT would not observe the flyby on 10th April as it would only be 23° above the local horizon, just below the LT's 25° limit. It was decided to observe on subsequent nights when BepiColombo would be higher in the sky, albeit much further away and a lot fainter.

At right are LT images of BepiColombo taken on the nights of 15th and 19th April, when it was 2 million and 3.4 million km (5 and 9 Lunar distances) from Earth respectively.

BepiColombo is now 10 million km (26 Lunar distances) from Earth, en route to its next "braking" flyby manoeuvre at Venus in October. It's scheduled to arrive at Mercury in late 2025 where it will begin studying the planet's composition, geophysics, atmosphere and magnetosphere. 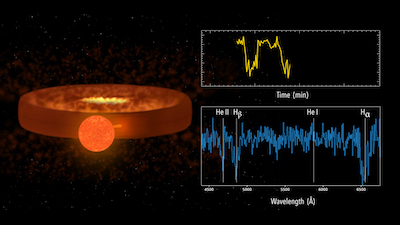 Swift J1357.2-0933 is a black hole X-ray binary which shows transient behaviour, alternating long periods of quiescence with short (weeks long) and violent outbursts. These episodes are triggered by a sudden increase of mass accretion onto the black hole. The system was observed to go into outburst in 2017: the first such event since the outburst which led to its discovery in 2011. In a paper published recently in Monthly Notices of the Royal Astronomical Society, Jimenez-Ibarra et al. report high time resolution follow-up of the 2017 outburst.

In the paper, RISE light curves were combined with spectroscopy from the OSIRIS instrument on the 10.4m Gran Telescopio Canarias. The light curves show a series of dips up to 0.5 magnitudes deep and lasting around 2 minutes. The recurrence time of these dips gradually increases as the outburst evolves. Similar events were observed during the 2011 outburst. Spectra obtained during the dips show broad and blue shifted Balmer and He II absorption lines. The interpretation is that the dips are formed in a dense and clumpy outflow, produced near the disc equatorial plane and seen at high inclination.

The authors conclude that the detection of dips in Swift J1357.2-0933 may be favoured by its high orbital inclination (i.e. near edge-on geometry), and as such the clumpy equatorial wind might not be a peculiarity of this particular system but, rather a common phenomenon of accreting stellar-mass black holes in outburst. The study shows the power of combining simultaneous or quasi-simultaneous high time resolution photometric and spectroscopic observations, and is an example of the type of observing campaign which could be pursued entirely robotically when the 4-metre New Robotic Telescope joins the LT at the Observatorio del Roque de los Muchachos in the middle of the next decade.

The new ETC for imaging with the LT. A similar ETC for spectroscopy is on the same page.

Between the two ETCs (one for imaging, the other for spectroscopy), existing and prospective users can answer questions on what exposure times are necessary to achieve a required signal to noise ratio. Users can select any of the many instruments mounted on the LT and adjust their settings, as well as the effect of atmospheric turbulence ("seeing") and background sky brightness.

The original idea to upgrade the ETCs' usability with Google Charts was Dr Marco Lam's, who is Scientific Software Developer for the LT. The new ETCs were developed by Lam and Dr Doug Arnold, DevOps Engineer for the New Robotic Telescope.

"Interfaces are becoming more web based, and the new exposure time calculator, using Google Charts and extended JavaScript functionality, has really improved the usability of this tool" said Dr Arnold.

Feel free to use the ETCs for yourself and discover how the LT can obtain images and spectra of your target: 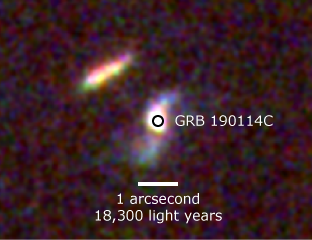 Liverpool John Moores University astrophysicists and the Liverpool Telescope contributed to a study published in Nature recently of a gamma-ray burst caused by the collapse of a massive star 5 billion light years away.

Analysis of the minutes immediately after the burst reveals emission of photons a trillion times more energetic than visible light.

“These are the highest energy photons ever seen from a gamma-ray burst,” stated Dr Daniel Perley, a senior lecturer at LJMU's Astrophysics Research Institute involved with the study.

Gamma-ray bursts are the most powerful explosions in the Universe, emitting more energy within seconds than the Sun provides in its entire life cycle. Most of this energy is in the form of gamma-rays, a form of electromagnetic radiation much more energetic than visible light or even the X-rays that are used in medicine.

On January 14 this year, an extremely bright and long gamma-ray burst, known as GRB 190114C, was detected by a suite of telescopes, including NASA’s Swift and Fermi satellites in space as well as the Major Atmospheric Gamma Imaging Cherenkov (MAGIC) telescopes and the ARI-operated Liverpool Telescope on the ground.

It is believed the burst is produced when material is expelled from a collapsing star at virtually the speed of light. This material collides with gas that surrounds the star, causing a powerful shock wave. The new study attributes this shock wave as the source of the ultra-high-energy photons, which were detected by MAGIC for a period lasting almost an hour following the initial explosion of the burst. The LT simultaneously observed the source in optical light.

Scientists have been searching for this type of signal for many years, so this detection is considered a milestone in high-energy astrophysics.

Dr Perley added: “Gamma-ray bursts have been known about for decades but many aspects of them are still a mystery. How can a single explosion produce so much energy so fast? So, these new results help us understand what really happens under these extreme conditions.”

Dr Perley was accompanied in the publication by his PhD student Allister Cockeram as part of a team of more than 100 astronomers across the globe.

Andrew Levan of the Institute for Mathematics, Astrophysics & Particle Physics at Radboud University in the Netherlands, said: “The observations suggest that this particular burst was sitting in a very dense environment, right in the middle of a bright galaxy 5 billion light years away. This is really unusual, and suggests that might be why it produced this exceptionally powerful light.”

In addition to the Nature study, a further paper based on measurements from the event has also been submitted by the Liverpool Telescope Gamma-Ray Burst team in the Astrophysical Journal for publication soon. In this paper, a team of scientists currently or formerly based at Liverpool John Moores University and their students, including PhD student Jordana Mitjans at University of Bath and Prof Shiho Kobayashi at LJMU, used the Liverpool Telescope data from this burst to study the properties of the shock-wave in detail during the critical first minutes after the explosion.

A third paper, prepared by Antonio de Ugarto Postigo of the IAA-CSIC in Granada, Spain with contributions by Perley and others, studies the nature of the distant galaxy in which the burst exploded.